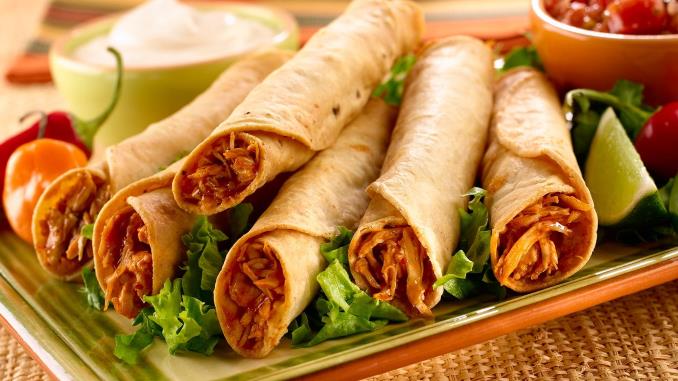 Both Flautas and Enchiladas are attractive and popular because of their classic flavor and modern touch. Thus, they make perfect snacks as both dishes can be quickly eaten while on the go.

However, the similarities between these two lead to many people’s confusion. That said, their cooking techniques and ingredients differ from each other.

This article will help to provide more details and insights into these two famous dishes so that you can always tell them apart.

Flautas are a Mexican delicacy made by rolling a tortilla around a tasty filling and deep-frying the roll. They are generally served hot from the fryer and can be topped with a variety of toppings. Since one dish of Flauta can consist of many tiny deep-fried tortilla rolls, you can enjoy many kinds of Flautas at once.

Some people differentiate this dish from taquitos, a similar cuisine. However, the names are frequently interchangeable. Others even claim that taquitos are a California word for its Mexican-Spanish “Flautas.”

In addition to its availability in Mexico, this platter is very popular in the Southwest of America, and there are also variations in South America.

This Mexican dish is traditionally served with a thin maize tortilla wrapped around a filling and covered in chili sauce. There are a variety of fillings available today. It is possible to add many different kinds of meat and vegetables to the filling and change the filling according to personal preference. You can also be inventive and create Enchiladas with the leftovers.

The dish seems to be an important one in Mexican cuisine. The Day of the National Enchilada is May 5th, which marks this dish’s significance to Mexico.

Origins (are they authentic Mexican?)

As one might think, Enchiladas originated in Mexico. People rolled various food components into tortillas as far back as the Mayan era. It has been a custom in the region for millennia, and it continues now.

Corn tortillas with fish filling were the first Enchiladas. When the Spanish colonists chronicled everything the Iocals ate when they arrived in Mexico, they talked a lot about the recipes and the different ways to make them. This dish was even featured in one of the first Mexican cookbooks in the 18th century.

In the case of Flautas, it is not clear where this type of food came from. Many people say that it was invented in Sinaloa back in the 16th century. In 1929, a book of stories about Mexican people in the United States targeted at a young audience gave the first modern description of a Flauta as a rolled-tortilla dish.

Two restaurants in Southern California are frequently credited with helping to invent and popularize the Flautas. In the 1930s, Guerrero’s daughter adopted her mother’s Flauta recipe to create a chain of restaurants in Los Angeles. Soon, competitors were selling similar products, which quickly brought this fried roll to the masses.

Nowadays, you can find these two dishes in almost every Mexican restaurant out there.

Both dishes are made with tortillas, which is a must-have in Latin American cuisine. Americans consume tortillas on a regular basis, just like how Asians eat rice.

Both dishes come in smaller sizes compared to other Mexican dishes. In general, Flautas are longer and thinner that usually come in small bitesize. Since Flautas tend to hold more fillings, they can be slightly weightier.

Yet, when you make Flautas at home, based on the way you construct your own Flauta, it can be smaller than a regular Enchilada.

Enchilada fillings are not particularly restrictive. It could be either freshly cooked meat or leftovers (for instance, leftover burrito burrito fillings). If you are a vegan, you may even forgo the meat and fill the tortilla with black beans and vegetables.

However, when it comes to meat, chicken and beef are the most popular Enchilada fillings. Yet, you can technically put anything in your Enchilada, so be creative and try out different combinations.

When it comes to Flauta, although the filling can also be versatile, the most common fillings are meats and savory fillings that complement well with meat. Thus, they should be added in moderation, or else the rolls may be burst inside your deep fryer.

Enchiladas are frequently served with two types of sauces: Rojo, a red chili dressing, and Verde, a green chili dressing. These sauces contain dried red or green chili peppers, tomatoes, garlic, onion, and sour cream. As a result, the sauces are usually quite spicy. They are usually covered in sauces when they are served.

Meanwhile, Flautas do not get covered in sauces. People usually make Flautas with cream, and green onions served on the side. Yet, this fried dish can also go well with spicy dipping sauce.

How to make Flauta?

How to make Enchilada?

That’s a wrap for our guide and tips on how to tell the differences between these two dishes. Hope that you now have grasped more helpful knowledge about these two famous cuisines and the recipes to make one at home if you desire.

What’cha waiting for? Let’s go surprise your friends and family with a special meal of Flautas vs Enchiladas, shall we?