So, Enchiladas and Entomatadas… If you have not tried Mexican cuisine before, it is tough to state the two dishes’ differences. Even if you are an enthusiast of Mexican food, there are still chances that you struggle to tell these two apart.

But don’t worry. Because this guide will help you distinguish between the two easily.

Mexican foods are indeed well-known for their unique combination of flavors and ingredients, which could leave a long-lasting impression on your taste bud. Naturally, you tend to end up craving more. In terms of flavor, Enchilada and Entomatada have won the top spot of several fussy palates.

Enchiladas are basically a dish originating in Mexico, where there has been a tradition of practicing rolling tortillas around other food fillings. The word itself is defined as a wrapped corn tortilla filled with pre-cooked ingredients in a bath of a sauce loaded with a lot of chili powder and chili peppers.

Unlike burritos, Enchiladas are made with corn tortillas instead of the usual flour tortillas. Therefore, one great dish like this must involve high-quality corn tortillas that have been covered in a savory bath of a cooked chili-based sauce (the sauce could have different variations).

The corn-based Enchiladas are then stuffed with various pre-cooked ingredients, including cheese, meats, beans, greens, root vegetables, or combinations of mixed ingredients.

There is not a wide variety of them to opt for in terms of the dish served alongside. Usually, these are eaten with refried beans, slightly roasted carrots, green salads, and potatoes. Eventually, you are good to go! 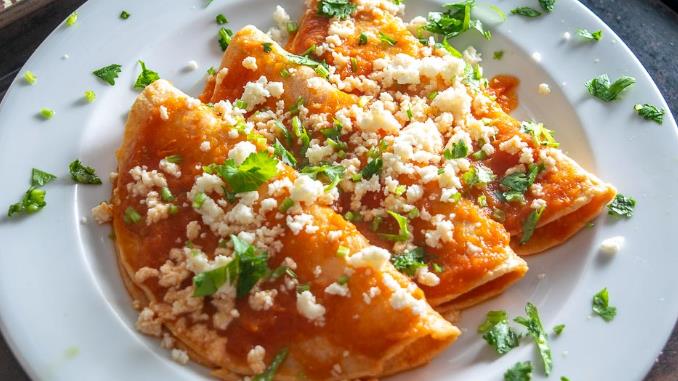 Entomatadas are also a tasty Mexican dish that is popularly known as a close cousin of Enchiladas. The word Entomatadas (pronounced en-TOE-ma-TAH-das) is roughly translated into “smothered with a tomato-based sauce.”

Despite offering similar features to their cousin, Entomatadas are flash-fried corn tortillas featuring a less spicy sauce made from fresh tomato rather than a classic chili-loaded sauce. This corn-based tortilla dish is a delicious variation of Enchiladas with several other ingredients accompanied. The most common ones are high-protein meats, cheese, beans, or even combinations of mixed ingredients.

Unlike their cousin Enchiladas, the fillings of Entomatadas are slightly different in terms of how they are pre-cooked. Most meaty fillings for Entomatadas tend to be cooked under high-pressure pots, so the meat is super tender. As a result, they can be pulled apart or shredded easily before being stuffed inside the tortilla-based wraps.

Entomatadas Vs Enchiladas: The Primary Differences

When it comes to differentiating Enchiladas and Entomatadas from one another, there are a few key areas that regular fans of Tex-Mex cuisine should bear in mind when deciding what to treat their stomachs.

The Recipe (Are They Mexican?)

Overall, both Enchilada and Entomatada are Mexican dishes that offer the same base ingredient called “corn tortilla.” However, while Enchiladas may be rolled with a corn tortilla packed full of meaty and veggie fillings and covered in a savory sauce right away, Entomatadas require a deep-frying step first.

Thanks to the extra frying process, the Entomatadas have a nice bit of crunch, which helps prevent them from being soggy when loaded with sauce. As a result, anyone who favors Enchiladas with a crispy and flaky texture should go for its cousin, which is Entomatadas.

Originally from Mexican cuisine, Enchiladas and Entomatadas are topped with loads of different things on the outside. However, in terms of sauce, there is a massive difference between the pair.

The tomato-based Enchiladas offer a milder flavor that is believed to suit more taste buds than the chili-based ones. Both tortilla-based dishes, however, can be added with several toppings.

Entomatadas tend to be garnished with a dollop of sour cream, shredded cheese (or known as queso fresco), and some slices of white onion. In contrast, Enchiladas are only topped with cheese and extra creamy enchilada sauce for more flavors.

If you crave a homemade version of the tomato-based tortillas, check this video out for a detailed recipe and cooking method:

Enchiladas are made up of various popular ingredients in any Mexican dish that have got fillings inside. Some of the most common components are high-protein meats, matured cheese, beans, root and green vegetables, or combinations.

Similarly, Enchiladas’ cousin is also filled with similar components such as meats, cheese, and beans. However, most Entomatadas’ fillings are made with protein from beef rather than chicken or pork.

Usually, Enchiladas with red-colored mole or sauce are served with refried beans. Likewise, Entomatadas’ side dish is often refried beans rather than rice. Hence, both of them are somewhat similar to one another in terms of the dish served alongside. Sometimes, those side dishes can be swapped without changing the flavors.

So, Are Entomatadas Better?

Hopefully, the general comparison above between Entomatadas vs Enchiladas has lent a helping hand in distinguishing the two Mexican sauce-soaked dishes. But, overall, it is pretty obvious to tell the difference between the pair.

An enchilada is generally traditional corn tortillas filled with several pre-cooked ingredients, namely high-protein meats, vegetables, and cheese. It is then dipped into a chili-laden sauce which gives it an extra layer of flavor. A classic Enchiladas dish tends to be topped with grated cheese and cheese-laden sauce for a more robust taste.

In contrast, an Entomatada is known as the cousin of an enchilada with the same base made from high-quality corn tortillas. Entomatadas, however, are loaded in a bed of red tomato-based sauce after being flash-fried. Thanks to the extra cooking bit, Entomatadas are crisper and flakier than Enchiladas, stopping them from being soggy when loaded with sauce.

Of course, both Mexican dishes are somewhat similar, which can be tough to opt for when ordering. Therefore, it is essential to bear in mind your dietary requirements so that you can choose the most suitable one for your bud taste.

Mexican people tend to add a few unique twists to whatever dishes they eat. This leads to the great variety of dishes offered on the menu at Mexican-brand restaurants, which can cause a sense of confusion and awkwardness amongst guests when ordering.

Our post, however, can rescue you from those awkward moments thanks to the detailed analysis of the differences between the two most popular Mexican dishes, Enchiladas and Entomatadas.