Although enchiladas and empanadas sound pretty similar, these two specialties are as different as chalk and cheese. But do you know all the differences between them?

If the answer is no, today’s post is for you. We’ve come up with a complete enchilada vs empanada guide and rundown to clear all your queries. Scroll down for a detailed comparison of the two tasty dishes.

So, What Are They?

Originally, Mexicans invented enchiladas to deal with their leftover food. Unlike the modern take, the earliest recipe reported was just a tortilla roll pairing with chili sauce. Yet, enchiladas have evolved into a renowned snack with tons of new adaptations over the generations. 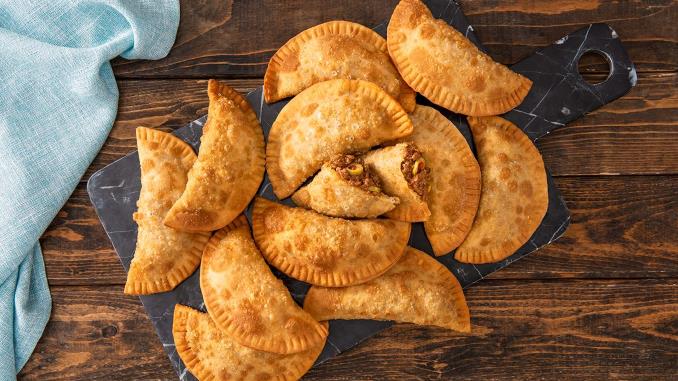 Empanadas take after the Spanish verb ’empanar,’ which means to coat or wrap in bread. Thus, an empanada is a fried or baked turnover in the shape of a crescent. Throughout the years, this pastry has become so popular that it appears in nearly all cultures worldwide.

Enchiladas started in Mexico, where the locals wrapped different ingredients into tortillas to handle leftover food. The history of this delicious dish is as far back as the Mayan period. It has been a custom in the locality for ages and remains until these modern days.

Corn tortillas with fish filling were the first enchiladas witnessed. When the Spanish conquerors arrived in Mexico, they scrupulously documented all food eaten by the locals, notably the enchiladas. Indeed, it even got featured in one of the classic Mexican recipe books published in the 1800s.

On the other hand, empanadas are from Galicia (Spain) and Portugal. During the Moorish conquests, they initially emerged in medieval Iberia.

Empanadas stuffed with seafood also get listed alongside Catalan, Italian, French, and Arabian cuisine in a textbook released in Catalan in 1520. Moreover, many people believe that empanadas are adaptations of samosas which are Arabic meat-filled pastries.

An empanada is a convenient and nutritious lunch for working people in Galicia and Portugal, comparable to a big pie that gets sliced into pieces.

Also, the empanada gallega has grown famous in Latin America due to the significant number of Galician immigrants. In addition, Spanish immigrants brought this delicacy to Latin America and the Philippines, where it is still renowned today.

The most apparent difference between these 2 dishes is the wraps.

“Tortilla” is a Spanish moniker meaning “small cake.” After being transferred from Central America to Europe, the Spanish called it the tortilla.

Enchiladas use corn tortillas as their wraps. These wraps are delicate, corn flatbreads that people found across Mexico and represent the world’s most famous ethnic bread in hundreds of restaurants, taco stalls, and groceries.

The most significant function of pastries in the past seems to be to wrap meats in baked foods to preserve the fillings’ juices, steam the ingredients, and protect the stuffings.

In medieval Europe, locals practiced this pastry method in the north, where substantial fats had the benefit over oils, which allowed for larger pastries.

The fillings are also what make enchiladas and empanadas different.

Enchilada stuffings are totally up to the diners. Either they can be freshly made meats or even leftovers. You may even remove all the proteins and add black beans or veggies to your Enchilada if you’re a vegetarian.

The two most preferred enchiladas protein stuffings, meanwhile, are chicken and beef. Today, though, you can include all protein choices to your Enchilada theoretically. Unfortunately, however, they only offer savory options, not sweet ones.

Different from enchiladas, empanadas’ fillings are way more adjustable. In addition, they can offer both savory and sweet options.

The Galician and Portuguese usually serve empanadas with tuna, sardines, or chorizo. However, the fillings can also be codfish or pork. Nowadays, each area has its own take on it.

For instance, salty empanadas of chicken, mushrooms, hazelnut meat, raisins, cheese, and ham are famous in Argentina. Meanwhile, Mexicans prefer the popular fruit or fruit jam fillings to make sweet empanadas. However, you can still go for a savory meat empanada to your liking here.

Seasoned potatoes, apples, strawberries, and quince (green, tart, fruit-like apples), for instance, are pretty renowned choices, too. Others may contain cave/sweet milk. Moreover, guava is a standard pick in Cuba as they are super flavorful with tasty protein like minced beef.

In enchiladas, Mexicans tend to go for 2 special dressings: Rojo (a red chili sauce) and Verde (a green chili sauce). Their recipes are super straightforward, with only a few essential ingredients like dried red or green chili peppers, tomatoes, garlic, onion, and sour cream.

As the signature ingredient is chili, enchiladas are usually spicy.

See how to make Rojo and Verde sauces here:

On the other hand, empanadas also have their signature sauce. Most of the time, a meat or fish empanada will come with tomato, garlic, and onion dressing.

Another big difference between enchiladas and empanadas is how people make them.

If you want authentic Mexican enchiladas, the chefs will first prepare a chili sauce, which they will then use to give the enchiladas’ distinctive taste.

The cooks will then stuff the corn tortillas with the ingredients before coating the roll in the distinctive chili sauce. Although several current versions call for adding cheese to the filling, most people prefer to serve it as a garnish.

After that, they’ll put the enchiladas in the oven to cook until everything is ready. Then, they may sprinkle grated cheese over the enchiladas for a melted cheese coating during the last few moments.

But whether you decide to fry or bake them, the first stages remain the same. You’ll need to start by making your stuffing and the dough, then putting them all together, and lastly, baking or frying them.

Enchilada, Empanadas: Which Suits You Better?

Now, if you’ve scrolled through everything but still don’t know which one to try, consider a few things here:

Is chicken and cheese popular types of fillings for these dishes?

Are these two more popular than burritos?

In my opinion, they’re all popular dishes you can find in the United States and Mexico.

That’s our complete Enchilada vs empanada guide. We know choosing between these two delicacies is challenging as each one has its own strengths. But we hope our detailed rundown has lent you a hand. So head out to your favorite restaurants and get yourself your favorite food. Happy cooking and enjoy your meal!