It is difficult to ignore the fact that some Mexican cuisines bear a significant resemblance to each other, especially in terms of ingredients like tortillas and fillings. To be honest, sometimes, only when it comes to cooking methods can we tell them apart.

The same case happens to chimichanga and flauta. Yet, don’t panic because this article will show you the correct tips to differentiate flauta vs chimichanga, even though they are similar deep-fried dishes.

Actually, the chimichanga is just a burrito with a deep-frying process added. The end result is a delicious, hot filling wrapped in a delightful, crispy outer shell. This is a popular dish in Tex-Mex and other Southwestern American cuisines.

Furthermore, a chimichanga is a tortilla-based cuisine that seems quite popular. They are made by stuffing a flour tortilla with various ingredients, mainly rice, cheese, beans, and meat, and folding it into a rectangle bundle. 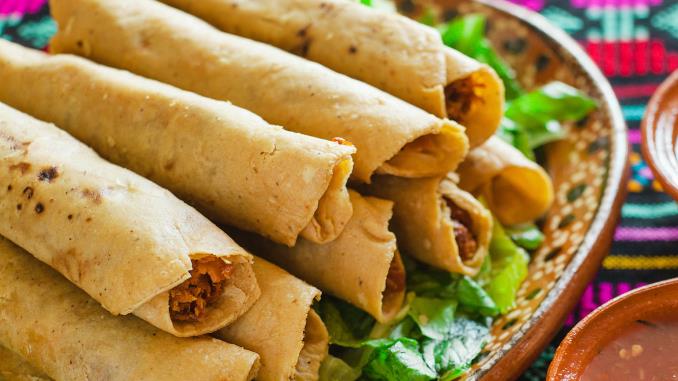 Flautas are a Mexican delicacy made by filling a tortilla with meat and other ingredients and deep-frying the entire thing. They are usually served straight from the fryer and might come with a variety of toppings.

You can eat a handful of flautas at once because their size is small, which means that one dish of flautas usually contains multiple tortilla rolls.

This plate is highly popular in the Southwest of America, and there are versions in South America, in addition to its base in Mexico.

Some people distinguish this dish from taquitos, a closely related dish. However, the two names can be easily confused and used interchangeably. Others even argue that taquito is a Californian term for Mexican-Spanish “flautas.”

Chimichangas vs Flautas: What Are the Differences?

Origin (Are They Really Mexican?)

According to some reports, the chimichanga dish originated in Mexico. Others claim it began when a man mistakenly placed his regular tortilla into a deep fryer in Arizona.

Given the Mexican variant chimichanga, one derivation stated that immigrants to the United States took the dish with them through Sonora and Arizona.

In the case of flautas, the origins of this dish are unknown. Many people believe it was created in the 16th century in Sinaloa. The first modern description of a flauta as a rolled-tortilla dish was in 1929, found in a collection of stories about Mexican people in the United States aimed at a young audience.

The flautas are often credited to two restaurants in Southern California for helping to invent and promote them. Guerrero’s daughter used her flauta recipe to open a chain of restaurants in Los Angeles in the 1930s. Shortly after that, competitors began selling identical products, bringing this yummy fried roll to the masses.

Tortilla is a staple ingredient in Latin American countries. Hence, it is not hard to understand why both these dishes are tortilla-based.

Flautas are long and thin rolls, while chimichanga usually comes in a bigger role. Chimichanga is a fried burrito, after all.

The chimichanga also weighs much more than a flauta because it tends to hold more contents inside.

Chimichangas are basically meat and veggies wrapped in a tortilla. Yet, since it is a fried burrito, you can add many different ingredients to your filling as long as the ingredients go well together.

Although the filling for flautas can be varied, the most typical fillings of flautas are meats and other savory fillings that go well with meat. As a result, other fillings should be used sparingly, or the rolls may explode inside your deep fryer.

Flautas are frequently served with cream and green onions on the side. This fried meal, however, can also be served with a spicy dipping sauce.

Meanwhile, a chimichanga is often served with cheese and sour cream.

So, the distinction between the two dishes is apparent by now, of which the most noticeable one should be their sizes. You can think of chimichanga as deep-fried regular-sized burritos and flautas as thin and long spring rolls.

Now with the differences out of the way, let’s learn how to make these delicious deep-fried rolls at home and to surprise your friends and family.

How To Make Chimichangas?

How To Make Flautas?

Are empanadas and burritos related to these 2 dishes?

In most cases, no.

They’re different, even though they’re all popular foods.

How do you roll a chimichanga?

There’s no one right way to roll a chimichanga, but here’s one method:

Some people like to add other ingredients to their chimichangas, such as rice, corn, and diced tomatoes. You can also experiment with different types of cheese, meats, and sauces. The possibilities are endless.

What do you eat with chimichanga?

Traditionally, chimichangas are eaten with sour cream, salsa, and guacamole. However, you can eat them with whatever toppings you like. Some people prefer to have them with a side of rice and beans, while others might enjoy a side of crispy fries. No matter what you choose, chimichangas are sure to be a delicious and satisfying meal.

Can you make chimichanga ahead of time?

Yes, you can make chimichangas ahead of time. Just follow the instructions above, but instead of frying them, place them in a covered dish and freeze. When you’re ready to eat them, pop them in the oven at 350 degrees Fahrenheit for about 20 minutes or until they’re heated through. Chimichangas make a great quick and easy meal for busy weeknights.

Should you eat chimichanga with a fork or a spoon?

That’s up to you! Some people prefer to eat chimichangas with a fork, while others enjoy using a spoon. It all comes down to personal preference. Experiment and see which method you like best. No matter how you choose to eat them, chimichangas are sure to be a delicious and satisfying meal.

Congratulations! By the end of this article, you must have grasped all the ways to distinguish chimichanga and flauta. All in all, their difference is clear: While flautas have the size of spring rolls, chimichangas are much bigger with their burrito size.

These deep-fried rolls make yummy dishes and great snacks, so don’t hesitate to follow our recipes to make some at home. You can thank us later.