Mexico is known for its wonderful recipes and delicacies, which have won the hearts of millions throughout the world. Among them, chalupa and tostada deserve to rank first in terms of uniqueness and convenience.

Due to their similarity, international tourists sometimes mistakenly believe that chalupa and tostada are the same thing, even though each has its own characteristics.

So, in this article, we’ll compare chalupa vs tostada and reveal the key things to help you tell them apart.

Chalupas are created by squeezing a thin layer of masa dough around the exterior of a tiny mold, creating an open container that resembles a boat shape, and then deep-frying the resulting crisp, shallow corn cups.

These ingredients include shredded chicken, pork, chopped onion, chipotle pepper, red salsa, and green salsa, to name a few. They’re similar to tostadas in that they’re both made of masa dough that’s been fried or baked.

Traditional chalupas from Cholula, Puebla, are small, thick, boat-shaped fried masa tortillas with just salsa, cheese, and shredded lettuce on top. Chorizo, pork, shredded chicken, or refried beans are added to the traditional cheese, salsa, and lettuce toppings in some regions of Mexico. In other cases, the fried masa is shaped into a tostada and topped with chalupa components. 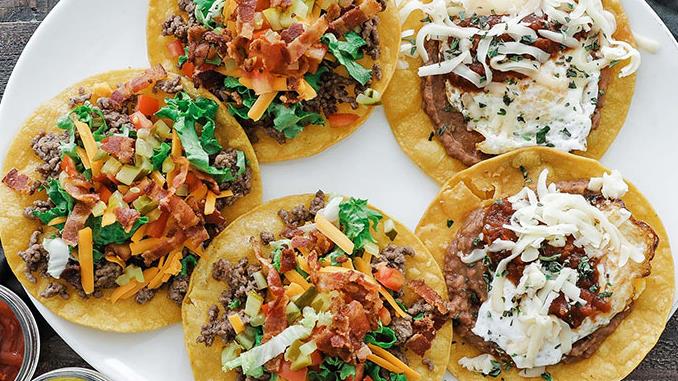 They’re similar to tacos, except that they’re generally left flat instead of being folded in half. They are often served as a main course. Because the preparation and cooking time is typically short, most people consider it one of the simplest Mexican meals to prepare.

These meals may be exact replicas or subtle variations of the original. Burritos, enchiladas, tacos, chalupas, guacamole, quesadillas, refried beans, salsa, and tamales are all common Tex-Mex dishes.

Essentially, the type of tortilla used for each type is the main distinction. Tostadas are prepared using tougher corn tortillas, whereas chalupas are made with soft flour tortillas.

Although chalupas are usually served flat and topped with tostadas, the tortilla isn’t necessarily baked. However, to guarantee crispiness, people usually bake the tortilla when preparing tostadas.

Chalupas take a bit longer to make since the flour tortillas must be fried in a pan until firm. Meanwhile, tostadas are made from corn tortillas that have been cooked flat and labeled “Tostadas” on the packaging.

How To Make Chalupas

How To Make Tostada

What is the right way to eat tostadas?

After each mouthful, set the tostada down to allow you to re-grip the tortilla and consume all of the remaining toppings. You may eat the toppings with your teeth instead of a fork. You can devour the entire tostada with your hands and teeth, especially if the tortilla isn’t heaped too high.

Is a chalupa authentic Mexican food?

Chalupas are a delicious Mexican antojito (snack) made from fried masa (cornbread). The term chalupa is derived from the Spanish word for shallop (or tiny sailboat) and refers to the concave form of the masa cake. Basic toppings for chalupas include salsa, cheese, lettuce, and meat.

What fillings should you use?

Tostada shells serve as a foundation for various delectable toppings, many of which are inspired by Mexican tastes. Tostadas may be as elaborate or as basic as you like, vegetarian or vegan! Here are some suggestions:

Begin with the tortilla shell as the foundation.

Add any of the following to the top:

Are tostada and taco the same?

No, taco is often folded, while tostada is often left flat on the dish.

Are chalupas and tostadas the same thing?

No, chalupas and tostadas are not the same thing. The main difference between them is that a chalupa is fried, while a tostada is not. Chalupas are also typically topped with refried beans, shredded cheese, and diced tomatoes, while tostadas can be topped with a variety of different ingredients.

How do you make a chalupa?

To make a chalupa, you start by frying corn tortillas until they are crispy. You then top them with refried beans, shredded cheese, and diced tomatoes. They can be served either warm or cold.

Should you fry or toast a tortilla for a chalupa?

What are some toppings for a chalupa?

Some toppings for a chalupa include refried beans, shredded cheese, diced tomatoes, and sour cream. You can also add other ingredients, such as ground beef, chicken, lettuce, and tomatoes. experimentation will give you the best idea of what to put on your chalupas. Try out a few different combinations and see what you like the best.

What is in a chalupa filling?

A chalupa filling typically includes refried beans, shredded cheese, and diced tomatoes. However, you can add other ingredients, such as ground beef, chicken, lettuce, and tomatoes. Try out a few different combinations and see what you like the best.

Where can I buy chalupas and tostadas?

Chalupas and tostadas can be found at most Mexican restaurants. If you don’t have a Mexican restaurant near you, you can also buy them online. Try searching for chalupas or tostadas on Amazon or eBay. You should be able to find a variety of different brands and flavors.

By the end of this article, I hope you now understand the critical difference between chalupa vs tostada through the information above. If you have any other queries, don’t hesitate to mention them in the comment section. It’d be our pleasure to add more insights to our existing post.