Mexican street cuisine, such as chalupas, tacos, gorditas, and tamales, occupies a particular place in our hearts because of its delicious carb and salsa content.

Although chalupa and gordita are two different dishes, they share many similar components, which can make a tourist confused when ordering food from a street stand.

Without further ado, let’s grasp the distinctions between chalupa vs gordita in the following paragraphs. Don’t stop until the end because we’ll show you how to create your own fried chicken chalupa with straightforward step-by-step instructions. Chalupas are a tasty fried masa antojito (snack) from Mexico (cornbread). The term chalupa refers to the concave form of the masa cake, which is derived from the Spanish word for shallop (or small sailboat).

Chalupas also exist in a variety of forms and sizes, including torpedos and tiny bowls, which can be thick (like sopes) or thin (like tortillas) (like tostadas).

Your fried chalupa shells should be eaten right away. Otherwise, they can be preserved for up to 2-3 days in a sealed ziplock bag at room temperature. The dough may be frozen for up to 3 months, but it must be thoroughly thawed in the refrigerator before frying. 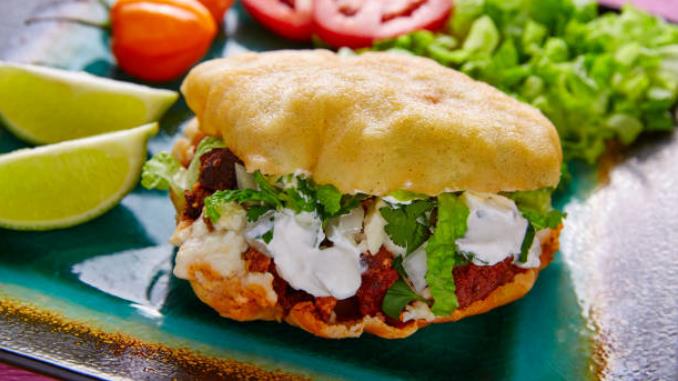 Masa harina, the same nixtamalized maize flour to create corn tortillas, is used to make gordita dough. Gorditas are generally deep-fried or cooked on a comal (griddle) in Mexico. For a similar look, shallow-fry the gorditas at home. When cooked, the gorditas bubble up and form a pita-like hollow within.

A gordita can be made in various ways, but they always call for masa harina and water. For flavor, some individuals add baking powder, while others add garlic powder or cheese. The gordita is deep-fried after being cooked on a hot griddle, giving it a soft interior and crispy exterior. They’re thick, almost like a fat corn tortilla, which allows them to be split and stuffed like pita bread.

The meal can also be served as a light lunch or dinner or as an appetizer before a rustic main course like lamb birria. Although most gorditas are served salty, there is also a sweet variation known as gorditas de azucar, which is made with sugar and spices in the dough and a filling of chopped fruits and whipped cream.

How To Make Gorditas

Can you find these dishes in big cities like Chicago?

Yes, you can. A simple Google search can show you many restaurants and food trucks that offer you these delicious dishes.

Does Taco Bell sell these apart from their popular taco?

Yes, they do, and you can try ordering next time.

In short, the primary difference between a chalupa and a gordita is that the chalupa’s shell is deep-fried. Despite its thickness, a chalupa’s shell wasn’t greasy, which will make crunchy noise when you bite it.

While they both use the same corn-based flatbread, the chalupa is crispy on the exterior, and the gordita is soft and pillowy on the inside. You can also consider gordita a thinker version of a taco because these two resemble each other in many terms, ranging from appearance to fillings.