Mexican cuisine is unquestionably one of the most popular in the United States.

In fact, one out of every ten restaurants in the US serves Mexican cuisine. It’s also a cuisine that uses many of the same components (tortillas, beef, salsa, rice, and so on) over and over again, but with varied preparations and presentation.

Do you know the difference between chalupa vs enchilada on the menu?

If you don’t, then keep reading, because this guide will show you their differences.

Overview About Chalupas And Enchiladas

Chalupas are created by squeezing a thin layer of masa dough around the exterior of a tiny mold, forming a concave container that resembles the boat of the same name, then deep-frying the result to produce crisp, shallow corn cups.

These are packed with shredded chicken, pork, chopped onion, chipotle pepper, red salsa, and green salsa, among other ingredients. They’re similar to tostadas in that they’re both composed of masa-based dough that’s fried or baked.

In addition to the basic cheese, salsa, and lettuce toppings, some areas in Mexico add variants such as chorizo, pork, shredded chicken, or refried beans. In other cases, the fried masa is shaped like a tostada and topped with typical chalupa toppings.

When referring to enchiladas, they are pretty similar to burritos. First, a maize or wheat tortilla is firmly wrapped with filling. Then, enchiladas are topped with sauce and cheese and served with a choice of side dishes; it’s one of the few Mexican meals that can be eaten with a knife and fork.

They are thought to have originated as a street snack that changed over time; the oldest recorded version of the dish was a rolled tortilla dipped in chili sauce. The term is made up of two Nahuatl words: “chili” and “flute.” 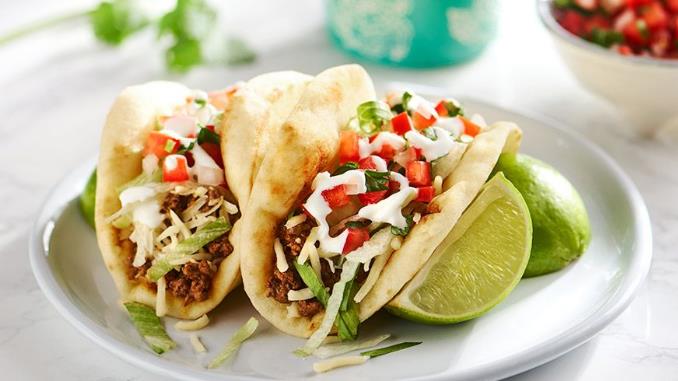 The forms of chalupas and enchiladas are what distinguished them.

Enchilada is a traditional Mexican meal that consists of a tortilla wrapped around meat, cheese, or vegetables. It began as a basic maize tortilla rolled up and dipped into a chili sauce by street sellers in Mexico.

The most popular enchilada presentation technique in the United States and Canada is filled, rolled, and then topped with additional sauce and cheese. The stacked enchilada is more prevalent in Mexico and parts of the southern United States.

In the United States, the hard-shell, U-shaped chapula is the most popular variety. A crisp-fried shell is generally filled with seasoned ground beef, cheese, lettuce, and occasionally tomato, onion, salsa, sour cream, and avocado or guacamole in this form of chapula.

Being a delightful consequence of Mexican, Native American, Texas cowboy, and Anglo cultures, this traditional Tex-Mex meal is one of America’s first fusion cuisines. As a result, enchiladas are highly adaptable. They hold up well to a range of fillings, including shredded meats such as beef, pig, or chicken, as well as meatless fillings like beans, sour cream, or cheese.

Topped with a cream sauce seasoned with jalapenos, tomatillos, and cilantro, these top-rated enchiladas include spinach, shrimp, and cheese filling. Don’t be afraid to mix up the fillings and the degree of spiciness.”

Enchilada shell is made of tortilla. Corn and flour tortillas are the two most common types. Both kinds are popular in Tex-Mex cuisine and are widely accessible. You may, however, make your own. It’s simple!

Maize tortillas are produced with a basic combination of water and masa harina, a corn flour that has been carefully processed. Flour tortillas are prepared using wheat flour, baking powder, and either shortening or lard. Because the wheat flour allows the dough to be stretched without crumbling, they’re bigger and thinner than corn tortillas.

Tortillas are made by kneading a flexible dough, pressing or rolling thin discs, and cooking them rapidly on a hot iron griddle.

Check out this video to know how to make tortillas:

Chapula shells are often made of flour. Masa dough is molded around the outside of a shallow concave shape and cooked to make chalupa shells.

When the shells are crisp around the edges, carefully move them to a sheet pan lined with paper towels to absorb the excess oil with a slotted spoon or spider. Don’t they appear to be delectable? Let me just add that they also smell great at this stage!

Enchilada sauce is divided into three categories in the United States: red, white, and green.

Red sauce has a deep and rich flavor that comes from the use of both dried and fresh chilies, as well as tomato puree. Chili powder is used in a lot of red enchilada sauce recipes. Chili powder is a unique combination of dried red chilies, cumin, oregano, garlic, and salt, not a single spice.

The green sauce has a light, fresh flavor due to the use of fresh green chilies as a basis. Garlic, onions, cumin, salt, and pepper are included in both the red and green enchilada sauces.

Finally, the white sauce enchilada is the most authentically American of the three kinds. Sour cream is generally the only ingredient in “white sauce,” however it is frequently combined with chopped green chiles, fresh herbs, lime juice, or even condensed soup.

Chalupa sauce is often salsa. Salsa is a frequent component in Mexican cuisine, and it’s used as a condiment on tacos, soups and stews, and tamale fillings. Fresh salsa prepared with tomatoes and spicy peppers is known as salsa fresca.

Salsa verde is a dip or salsa made with cooked tomatillos that go well with chilaquiles, enchiladas, and other Mexican meals.

First, sprinkle the enchiladas with shredded cheese, then bake them in a moderate oven (350 degrees F/175 degrees C) until the enchiladas are cooked through, the sauce is bubbling, and the cheese is melted. It should take around 30 minutes to complete this task. (If you want the enchiladas’ edges to stay soft, cover the pan with foil.)

Dress the tortillas as you like once they’ve been cooked. Traditionally, basic toppings such as queso fresco, cilantro, and shredded lettuce are used.

You can also make Mexican chalupas with leftover rotisserie chicken for a heartier taste. If you have any leftover pulled pork or even cooked shrimp, they’ll go great with these chalupas.

Can you find these two dishes in a traditional Mexican restaurant?

These are among the most popular dishes you can find. So, try them out.

Even though it looks similar to Enchilada, these two are not the same.

That’s all you need to know about the distinction between chalupa vs enchilada.

After reading this tutorial, you will no longer be perplexed about these two dishes. Hope that the useful information above can help you prepare your own chalupas or enchiladas.

link to Can You Microwave Parchment Paper? Is It Safe To Do So?

Parchment paper is one of the must-have items for baking cookies or keeping the counter clean when you make bread. Yet, is it trustworthy in a microwave? In other words, can you microwave...

Continue Reading
link to Can You Microwave Silicone Utensils? Is It Doable Or Not?

Silicone is one of the most common materials for making cake molds, plates, or bowls. Without a doubt, silicon dinnerware is widely used in today's kitchen. However, can you microwave silicone?...