The Mexicans are renowned for always putting their heart and soul into food.

Therefore, their superb cuisine is designated as one of UNESCO’s Intangible Cultural Heritages. Among the most treasured dishes in Mexico are burritos and taquitos.

Although these specialties have some similar features, they are by no means identical. So if you still have difficulty differentiating between burrito vs taquito, keep reading this guide.

I will show you their differences. 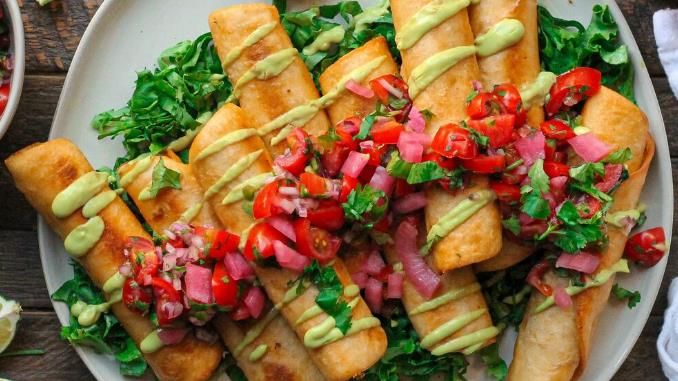 Both dishes share a basic construction, which involves wrapping tortillas around fillings composed of marinated meat, veggies, cheese, and sauce. They are then sprinkled with Mexican seasoning, which is a spice blend of cumin, garlic, chilly powder, and the likes.

As simple as they are, both burritos and taquitos have gained tremendous popularity for their customizability. For instance, if you are a vegan, you can substitute meat with plant-based protein like tofu.

Or, if you are from Europe, feel free to create your own Western-style versions which mimic the taste of your home country’s delicacies, such as hamburgers, BBQs, or pasta. The possibilities are almost endless.

Despite dissimilarities among recent variations, burritos and taquitos still retain their key characteristics, which can help foodies tell these dishes apart.

7 Main Differences Between Burritos And Taquitos

What makes burritos and taquitos easily distinguishable is undoubtedly their shapes. Burritos are shaped like a cylinder, with the bottom being sealed up and the top being open. They are also wrapped in a particular fashion to look similar to an envelope on the side.

Unlike burritos, taquitos bear significant similarities to cigars due to their long and thin shapes. They also have 2, instead of 1, open ends.

Burritos make for substantial meals due to their relatively large size. They are also confined to breakfast, lunch, and dinner for this exact reason.

On the contrary, taquitos are often served as snacks or appetizers because of how small they are. Still, they can occasionally act as main courses, provided that each serving contains at least 4 rolls.

Though burritos and taquitos alike use tortillas as the base ingredient, they call for entirely different types.

Flour tortillas lend themselves well to burritos since their unmatched sturdiness can hold this dish’s heavy fillings without cracking. What’s more, flour tortillas can be used to wrap envelope-shaped burritos without any problem as they can bend and stretch easily. The cherry on top is that they tend to be on the larger side, which perfectly suits the size of burritos.

That being said, corn tortillas’ delicate texture makes them ill-suited to burritos. Prone to breaking apart, corn tortillas can cause this dish’s contents to fall out, making eating burritos a messy and unpleasant experience.

In addition, burritos differ from taquitos in their tortillas’ color. Taquitos’ exteriors are golden since this dish is either fried or baked. Burritos’ tortillas, on the other hand, vary significantly in color. They can be flavored with different vegetables, which lend their own vibrant color to flour tortillas.

The size of these dishes dictates which types of protein are used. Taquitos’ modest size means that they can only feature shredded meat. Burritos, on the other hand, can hold heavier minced meat.

Additionally, various ingredients in burritos, often including rice, fried beans, cheese, ground meat, and avocado, can be laid over each other. This brings deep and immensely satisfying layers of flavor to the dish.

Such layers of flavor are delivered differently by taquitos. Instead of being placed on top of each other, all ingredients are blended, creating a single lightweight but delectable mixture.

This dish does not undergo any further cooking process once you’ve wrapped flour tortillas around burritos’ fillings.

In contrast, taquitos need to be submerged in hot oil in a non-stick skillet until they sizzle. This deep-frying process is precisely the reason why taquitos can yield crispy, beautifully golden exteriors.

A wide variety of ingredients is already incorporated into burritos’ contents, eliminating the need for additional side dishes. As mentioned previously, one serving of this Mexican delicacy is more than enough for a hearty meal.

On the contrary, hand-sized taquitos often do not feature such a large amount of filling, so they need to be supplemented by other types of food. Traditionally, taquitos are dipped in flavor-enhancing condiments, such as salsa, sour cream, or guacamole.

Recently, chefs have experimented by pairing this savory dish with sweet food, such as corn pudding, Mexican street corn, Mexican black beans, or sweet potatoes. These culinary combinations work like magic. Notice that professional cooks often accompany taquitos with corn or Mexican food as they perfectly complement each other.

Without a doubt, taquitos’ corn tortillas are healthier than their flour counterparts. To be specific, 45 grams of corn tortilla provide under 100 calories, while the same quantity of flour tortilla contains a whopping 138 calories. In addition, corn tortillas are also lower in carbohydrates and saturated fat.

In addition, corn tortillas are an abundant source of essential nutrients, the most important of which are fiber and magnesium. The former alleviate digestion and cardiovascular diseases, while the latter plays a significant role in the function of your brain and muscles. Corn tortillas are also the go-to options for those allergic to gluten, who often fail to tolerate flour tortillas.

However, flour tortillas’ saving grace is their greater amounts of iron and calcium, both of which are crucial for your bones.

To maximize their nutritional values, we recommend you buy traditionally-made corn tortillas, which utilize 100% corn instead of mass-produced varieties, which use dehydrated cornflour and dilute it with wheat flour.

The same is true for flour tortillas. Tortillas made from whole wheat invariably outshine those made from refined wheat.

Last but not least, bear in mind that although the tortillas of taquitos are less calorie-dense than those of burritos, taquitos, as a whole, can still be fattening. This is because this dish is deep-fried before serving. For this reason, try baking in place of frying taquitos if you want to reduce your daily calorie intake.

Are these 2 dishes popular in Mexican cuisine?

What kinds of meat and food are often served with them?

For taquitos, you should try them with some fruity salads, or Spanish rice, corn, or beans.

For burritos, you should try them with Mexican coleslaw, salad, corn, Pico De Gallo, etc.

Even though they look similar to taquitos, these two are not the same. And we will explore this topic in the future.

Burrito and taquito’s rich taste is representative of the flavorful and irresistible Mexican cuisine. This shared characteristic, however, causes many people to feel confused about these seemingly similar dishes.

After reading this detailed comparison between burrito vs taquito, we hope you can not only tell these delicacies apart but also appreciate their unique and lovely features.