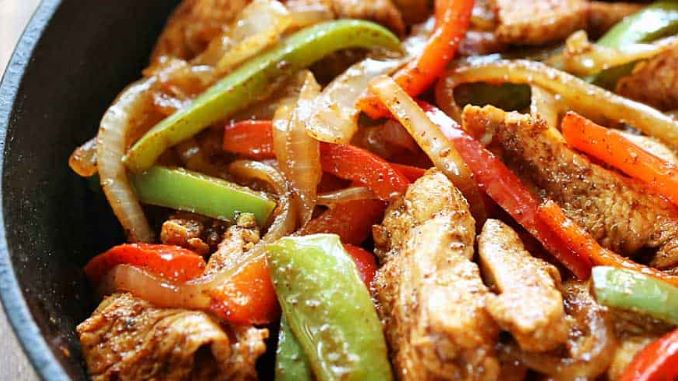 Despite being considered one of the healthiest food options amongst many greasy Mexican ones, many Mexican food addicts are not convinced that chicken fajitas are healthy to eat daily.

Today’s post will play an active role in debunking some myths behind the level of the healthiness of the chicken fajitas.

If you have been a constant fan of chicken fajitas and wonder how healthy the dish is, this post is just for you.

In general, chicken fajitas are NOT fattening at all in terms of calories provided per serving. However, it should be noted that if you opt for several side dishes served with chicken fajitas, the Mexican-based dish could be unhealthy and fattening.

What’s The Better Choice For Healthy Fajitas? Chicken Or Beef?

If you are a long-loving fan of Mexican-flavoured fajitas, you would be adamant that there is a range of meat options that could go with the fantastic fajitas. The most traditional choice for fajitas is known to be chicken.

However, more meat and meat-free options have been added to the menu in recent years due to the great demand for different diets. Apart from chicken, fajita-loving addicts can opt for beef, pawn, or even veggies versions.

The nutritional value varies slightly depending on the type of protein chosen. According to some honest reviews released by professional dietitians, chicken fajitas would be healthier due to several nutritional figures, notably fat content and calories. It is estimated that a serving of chicken fajita could provide roughly 430 calories while that figure for the beef option could be slightly higher.

This leads to the fact that your intake of calories would be higher if you choose to consume beef fajitas. There is, nevertheless, a trade-off as beef is known to contain more protein than chicken. So, the final verdict is reached by you. It is always best to be mindful about what you consume daily alongside the food’s nutritional facts.

How Do You Know If A Food Is Fattening Or Not?

Regarding health and nutrition, it can be pretty confusing to identify what is good for our health and what we should skip due to the fattening ingredients present in the food.

It is, however, within our capacity to tell whether or not the food is fattening if you have possessed some quick and easy know-hows.

Here are three tips that you should take on board when telling if the food is unhealthy and fattening.

First and foremost, always remember to spare a bit of your time to read the ingredient list. This is considered a necessary action as it could help you find out what you have been consuming.

From there, you can have a glimpse of what ingredients are contained in the food, which can prevent you from digesting some fattening ingredients, as those can have a detrimental effect on your overall health in the long term.

Secondly, it is a definite must to pay careful attention to the types of fats contained in the food. You should focus on the right kind of fat to help protect you against some diseases and boost your immune system.

Last but not least, it is best to put convenience into account. Usually, fattening foods tend to be made quickly with several processed ingredients containing loads of fat and preservative substances that allow the foods to stay fresh longer.

Therefore, it is much better to go for wholesome ingredients. They might take a few minutes to prepare, but they indeed contain fattening substances that are unhealthy for our bodies if we consume many of them.

How Many Calories Are In A Chicken Fajita?

In terms of nutrition facts, the usual chicken fajita portion with peppers and onions tends to be medium in calories, with a substantial intake of 430, give and take a few calories.

This is considered a standard serving of a chicken fajita with an 8-diameter flour tortilla and some condiments. Other figures, including total fat content, carbohydrate, and protein, come in at 15.7 grams, 38.8 grams, and 33,4 grams, respectively.

On the other hand, a fajita served with beef might contain a little more than 430 calories, which can be higher in protein than chicken.

However, those on a low-carb diet can still enjoy the flavourful taste of chicken fajitas by opting for non-tortilla options. When it comes to nutrition information, a serving size of a chicken fajita without tortilla and condiments served can be low in calories intake with just 400, give and take a few calories. This low-carb option offered on the table is known to satisfy more demanding stomachs who are not keen on regular serving with tortilla wraps.

Can You Eat Chicken Fajitas Every Day?

As the nutritional figures stated above, we all know that these are still heart-healthy Mexican food that fajita-loving fans can reward themselves on an occasional basis. Chicken fajitas, nevertheless, can be detrimentally bad for your health if they are restaurant-served.

One thing to bear in mind is that chicken fajita’s healthiness will vary from place to place, with some establishments having medium-range amounts of fat and calorie content. In contrast, others could offer servings that are high in those numbers.

This is because there are side dishes served along with the main dish, such as sour cream and laden-cheese guacamole, which can considerably increase the total amounts of calorie and fat contents.

Even though avocado guacamole contains various beneficial nutrients and unsaturated fat, which can help protect against cardiovascular diseases, it is still considered high in fat and calorie, which is bad for health if anyone eats regularly.

It is, however, reasonably heart-healthy in many aspects to having chicken fajitas if you manage to make them at home and not attempt to add a variety of fattening ingredients into the fajitas. A home-prepared portion of chicken fajita is believed to be packed with loads of nutritious ingredients alongside leaner protein and slow-releasing carbs.

This means they’re not only good in terms of overall health, but also you can feel fully satisfied after tucking in your meal, thanks to the provision of plenty of goodnesses such as protein, healthy fats, and fiber. Chicken fajitas, additionally, are relatively easy and quick for us to replicate at home.

Except for the nutrition facts, another concern worth paying attention to is the grilled meat in the fajita. When the meat is grilled under charcoal, it releases some chemical substances, namely polycyclic aromatic hydrocarbons (PAH) and heterocyclic amines (HCA), which can cause cancer to some certain extent in our bodies.

Therefore, it is highly recommended that we had better not have fajita with red meats regularly. If you would like to have fajita more often since it is your firm favorite, it is best to opt for some other alternative options containing less sodium and rich in vitamins and minerals. Some healthy alternatives can be vegan-friendly fajitas or chicken fajitas served with a significant amount of salad.

What Are Good Side Dishes For You?

Here are the 5 most highly recommended options that we have already lined up to those sizzling plates of marinated meat and searing vegetables, including Mayan Couscous, Traditional Mexican Guacamole, Sweet Corn Tomalito, Cilantro Tomato Corn Salad, and Avocado Salad. In terms of flavors, they are all nice to pair with either chicken or steak fajitas.

First up, regarding Avocado Salad, it is a mixture between a salad and a freshly-made salsa that is believed to be a tasty side dish for any dish with grilled meat, especially chicken fajitas.

Second place is the vibrantly colored salad with a summery taste called “Cilantro Tomato Corn Salad.” This summery salad is a fantastic side dish that partners exceptionally well with a wide range of fajitas, namely beef, and chicken versions, thanks to the freshness of all the vegetables alongside tasty vinaigrette.

Next on this ranking is the gorgeous Sweet Corn Tomalito which is commonly known as steamed corn pudding. This old-fashioned side dish is worth giving a try with any kind of fajita, particularly meat-free fajitas.

Our next dish is always a firm go-to side dish for Mexican cuisine enthusiasts, especially on a Mexican night. The authentic Traditional Mexican Guacamole served with a sizzling platter of spicy chicken fajita is a great combo that you would never wish to miss when enjoying any delights at Mexican restaurants.

Suppose you are not a fan of spicy food and are concerned about the spice level. In that case, the jalapeño in the guacamole can be removed for a milder flavor, allowing you to enjoy your favorite chicken fajitas.

Despite coming in final place, this side dish still wins the heart of several Mexican-cuisine-loving fans thanks to a unique flavor offered by the combination of two cuisines: Mexican and Middle Eastern.

Suppose you are a massive fan of chicken fajitas and would very much like to eat those sizzling plates of well-marinated meat and flavourful side vegetables regularly. In that case, you are in for a treat as this article provides you with essential information which can help you satisfy your Mexican cravings without worrying about the long-term health effects.

From now on, eating chicken fajitas can no longer be a worrisome problem at all. Spare a few minutes of your time looking at our post, and you can eat your firm favorite now and again.